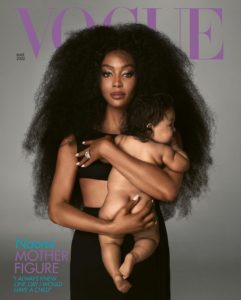 Naomi Campbell is the cover star of the latest issue of British Vogue, and she’s joined by a cutie. The supermodel and her 9-month-old daughter were photographed for the March edition of the fashion magazine.

Naomi announced her daughter’s arrival on Instagram in May 2021, with a sweet photo of her hand holding her baby’s feet.

In her interview, she highlights motherhood, diversity in the fashion industry, and her fast-paced professional life.

Speaking to Vogue about her daughter, she says, “I’m lucky my little one loves to travel like me – no whimpering taking off or landing. She’s a good girl: she sleeps very well, she hardly ever cries, and I’m told she’s very alert for her age. She’s just started waving, which is fun. She laughs a lot. She’s almost talking.”

She continues, “I think she might walk before she crawls. And she’s got six teeth already.”

Contrary to reports, Naomi revealed that her child was not adopted. “She wasn’t adopted; she’s my child,” she said. “I can count on one hand the number of people who knew that I was having her,” she explains. “But she is the biggest blessing I could ever imagine. It’s the best thing I’ve ever done.”

Gushing over how her daughter loves music boxes, exploring colours, textures and shapes, her wardrobe which is growing into one that will soon rival hers, and how motherhood makes her feel:

I’m like a kid again. I’m reliving nursery rhymes, playing and discovering how many great new toys there are out there in the world! And dolls! Things I couldn’t even dream of. She has a really nice closet thanks to so many designers and friends who have sent her some lovely things, but wow, kids grow fast, don’t they?

On what the biggest surprise has been since becoming a mother:

My daughter comes first. Everything I do, I do for her – that’s it. It’s so completely selfless, isn’t it? Does she want more? Why not?

Reminiscing on the success she shared with 1990s icons Linda Evangelista, Cindy Crawford and Christy Turlington:

It was an incredible time, but we worked hard. And no matter how many outfit changes, how many shows, we never said we were tired. We all loved it and we kept each other’s energy up. We did eight shows a day and then we would go and celebrate with the designers in the evening. I wonder sometimes if models now could have kept up with us.

Revealing a little secret about modelling:

I still enjoy it, but it’s nerve-racking. Because I’m 51 years old walking with girls who are 18! It’s great to be with these young ‘uns at my age, but I have to say, at one of the shows, I was like, ‘Come on, girls! Pick up your feet! Why are you walking so slow?’I feel like my time was more joyful. We smiled! We got to show off our personalities.