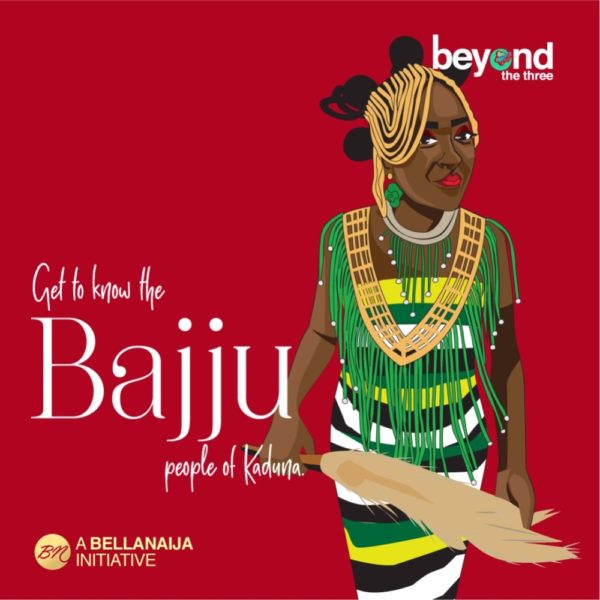 In the first edition of this series, we were introduced to the Idoma people; this was followed by the Esan people.  Joan introduced us to the Oegorok people and we learned about the Mhiships from Mwanret. Ma’ade told us about the Bassa people.  We had the pleasure of reading about the Uwano people of the Weppa Wanno kingdom. We were taken to Langtang to meet the Taroks, thanks to Tanchit. Moses provided us with insight into the Isoko people. Nhaoma shared the Ikwerres with us.  We’ve also met the Bwatiye people, thanks to Kada, and the Yandangs, courtesy of Lynda. Following that, Kandyi introduced us to the Fantswam people.

On this edition, Zichat introduces us to the Bajju ethnic group. Like the Fantswam people, Bajju people are found in the southern part of Kaduna state. They are also referred to as Kaje people, but this description is often frowned at by Bajju people. According to Zichat, “The Bajju people believe that when you see a shooting star, it means a great man died and he will reincarnate somewhere. I want to share my culture with the world because I have an interesting culture and people won’t be confused when I say I’m not Hausa, I’m Bajju and I speak Jju.”

***
What’s your name and what does it mean?
My name is Zichat, it means ‘we love’. My friends call me, Chat for short which means ‘Love’. My dad calls me Abvoi which is a name of a god worshipped by Bajju.

Such high praise, to be named after a deity. What language do your people speak?
My language is Jju, the people are Bajju and our lands or villages are called Kajju. I can’t speak it fluently. Now I’m covering my face in shame.

Please, don’t be ashamed. Have you ever been to your home town?
Oh Yes! I’m from Abet and I have been there countless times. Yay!

Super yay! Okay, Zichat, tell us about some of the unique rites and cultures about Bajju people?
Marriage rites
Well, my grandmother told me the ancient practice was that once a man picks interest in a woman, single or married, he plans how to kidnap her, takes her home then sends someone to her family to inform them that he is married to their daughter.

According to Danjuma Habu in his book, The Bajju People: The Bajju marriage rites are in four stages:

Four stages of traditional marriage rites:
Hwun: the reservation. The father of the male child is allowed to go to a household that has the prospective bride. The bride may be of any age at the time of the visit. If the families are close he may even reserve a baby in the womb for his young son. To seal this, he may leave a ring or other durable item of value.

Bride gift: Bajju do not believe in exchange of wealth to formalize marriage. However a gift – often a ceremonial hoe – is presented. The hoe has special significance because the people are primarily farmers. This is accompanied by a gift for the mother-in-law – usually a goat or fowls that she may use however she chooses. At the point of this presentation the marriage is legalized. All offspring of the marry now belong to the suitor.

Third is the formal announcement at the woman’s house. The traditional beer must be prepared by the suitor’s family and sent or brought over. The elders will invite family and neighbours and eat and drink and bless the union. After this the girl is expected to go to the house of her in-laws to return the drink containers. She will spend two days doing household chores and that will give the family a good chance to assess her before she returns.

The final transfer: on a prearranged day, the girl will be sent on an errand and members of the boys village will lie in wait to ambush and abduct her and take her away. Often her cries may be heard by her own people and they will fight to stop the abduction. If the abduction fails, the boys people will lose respect, but if they succeed they will get some gifts as acknowledgement of their efforts.

Naming
As for naming, there were no special occasions. The father of the child comes up with a name. Usually names describing his mood, season the child was born or an honour to a great man in the family.

Dressing
The men used to dress in bente. It’s just like g-string women wear these days but it’s made with a certain kind of wool. The women used to wear fur from animal skin and leaves.

Bajju brides dress in two pieces white, green and yellow materials and beads. One piece covering the breast and the other piece is worn from the waist to some inches above the knees. While the beads are worn across the body, on the waist, head and ankles.

Food
Bajju food is basically, detuk which the Hausa call tuwo. It’s made from corn flour. It’s usually eaten with jajju also known as karkashi. Then jok kada which is basically different types of beans.

Funeral rites
The Bajju people used to dig and bury people in round graves. The legs of the corpse are usually broken and bent backward to the waist and same thing is done to the hands. The corpse is usually positioned kneeling or smaller holes are dug in the grave and the chin of the corpse is placed in one of the little holes. Afterwards, the family members pour a handful of sand into the grave before the final covering of the grave. Then a small clay pot is kept with water on the already covered grave, while the older members of the family wash their hands and swear that if the person didn’t die a natural death, his or her death must be avenged in 7days. Men are buried facing east while women were buried facing west.

That is so interesting. Tell us about some of the cultural festivals of the Bajju people
We have the Bajju day. It’s usually like a love feast with loads of traditional foods like detuk bu jajju, pikpe, jok etc. Then the traditional dance known as samba and Batram band playing their songs. The men use some ancient blankets as their costumes while the women dress in white, yellow and green materials with same colour of beads.

Another festival among the Bajju is the Swa Nakan or Yanakan (end of farming celebration) although this is only practiced by the men. The men contribute to make local drinks and they also contribute chickens. They kneel and take turns at taking the local drinks. This how they celebrate end of a successful farming season.

Do you know any Bajju folklore?
Women are not allowed to eat eggs as they might eat their children. Men are not to share their ancestral secrets with women even their wives. Women do not eat gizzard, it’s strictly for men in the family.

Wow! What’s that thing you don’t really like about your culture?
Some of my people still worship a god called Abvoi. I think that’s idol worship and I don’t like it.

What’s that thing that you love the most about your tribe?
My culture doesn’t tolerate laziness, it encourages respect and abolishes every form of indiscipline.

Thank you so much, Zichat. We appreciate you taking time to talk to us about the Bajju. BellaNaijarians, find out more about the series HERE. Click HERE to read more entries in the series.

So Many Promises Followed By So Many Failures! What Are We Going to Do In the 2019 Elections?