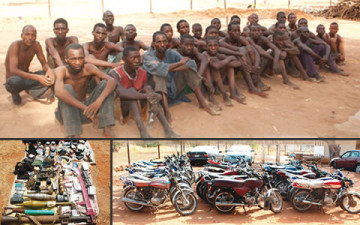 The fight against the Boko Haram sect is gradually but steadily going on.

11 members were killed during shootouts with Special Forces while trying to escape the country through Taraba State and Gumti in Adamawa State into Cameroon.

Major General Chris Olukolade, the Director of Defence Information, revealed this information on Thursday via e-mail. He also said that 31 fighters of the sect were arrested while attempting to flee.

The terrorists were trapped in a location and were forced out their hideout by hunger reports Punch.

A number of dangerous weapons, explosives and over 70 motorcycles (Okada) were recovered by the army.

It’s great to see victory against the Boko Haram sect. If you recall, a top leader was recently captured (click here to see)

“Surulere” Pays Off! Dr Sid is No. 1 as he Co-Hosts MTV Base Official Naija Top 10

Nollywood’s Biggest Blockbuster? “Half of a Yellow Sun” Had a $10 Million Budget