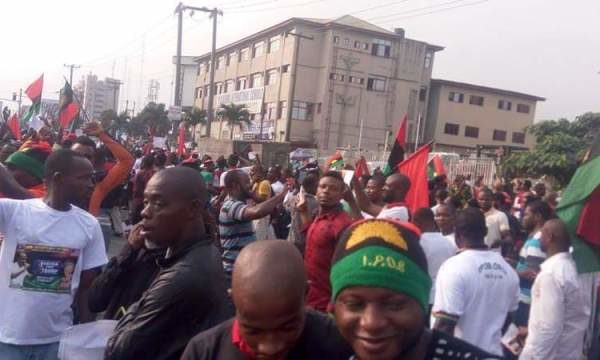 About 20 pro-Biafra agitators were arrested by the police in Enugu on Tuesday after they attacked Igbo leaders at an event, Punch reports.

A pan-Igbo group had reportedly organised an event to honour Igbo personalities.

Members of secessionist group Indigenous People of Biafra (IPOB) had also attended the event, and had kicked after one of the leaders commented on the need to restructure Nigeria.

The IPOB members had reportedly protested, chanting, “It is Biafra or nothing else.”

The organisers had attempted pacifying the protesters, but things went violent after it was announced that first Nigerian president Nnamdi Azikiwe would be honoured with a posthumous award.

The protesters had reportedly condemned Azikiwe, saying he was to blame for the problems plaguing Igbo people in Nigeria.

The leaders had escaped the venue and the protesters pelted stones at their vehicles, damaging several cars.

The police had reportedly gone on to arrest about 20 of the protesters.